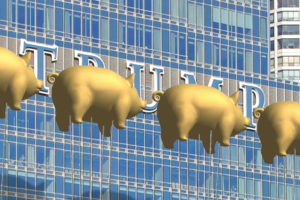 UPDATE! THIS IS GOING TO HAPPEN! Later in summer 2017 for ONE DAY! We will keep you posted.

An architecture firm in Chicago, New World Design, wants to diminish the exaggerated signage that was posted on the exterior of the Trump building in Chicago. These architects, offended by the bad taste and ugliness of the HUGE letters facing the Chicago River, devised a plan where there would be 4 GIANT golden PIG balloons floating from  buoys in the river itself, thereby blocking the T R U M P lettering. They made this rendering of their plan (see photo) and titled it Flying Pigs on Parade: a Chicago River Folly (2016).

New World Design architect, Jeffrey Roberts, likes the building itself  (and we do too.) It is graceful and is complementary with other buildings in the city. That is why we were all so sad that the lettering was plastered on the side of the building to blemish it.

Architect Roberts explained that the idea is inspired by a classic rock’n roll album, titled “Animals” by Pink Floyd. Another inspiration was the George Orwell novel, Animal Farm – many of you might have read that in school.

The architects might actually get this project into the real world, even just temporarily. We would like to see those golden piggies soaring high in the sky!

Read more at The Chicagoist.