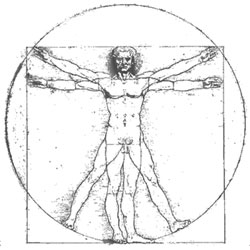 Back in Ancient Rome, in the First Century B.C.E., an architect named Vitruvius wrote a series of ten books on architecture titled “De Architectura”. These books were hand written and illustrated and we are sure they were absolutley GORGEOUS, but alas, not one copy of them survived. In the 15th century, some monks in Italy made copies of the originals and these are what exist today. One architect from that century, Fra Ciocondo, is known for the illustrations he added to the text.

Don’t forget that back then, without television, film or video, the only way someone would be able to describe a physical building to another person was to draw a picture and use words. So these books are a treasure of the history of architecture. People who can travel are so fortunate to be able to see structures “in person” – few people, even today have the luxury of travel.

You might have heard of the Vitruvian Man. This is a very famous drawing that was made by Leonardo da Vinci of a naked man outstretched in a circle and a square. It is named after Vitruvius because Vitruvius described perfect proportions (measurements) in architecture. Leonardo was very interested in proportions, architecgture, painting, engineering and a million other things. When he drew the Vitruvian man, he was illustrating the perfection of the proportions of the human body. Wikipedia has a good explanation here. Vitruvius described this perfection in De ARchitectura, where he said the middle of the human body is the navel (belly button), and everything extends out from there. Is it true for you?

It would be interesting to try and do some measuring of your own body to see if the proportions measure the same with you as with the Vitruvian man.

Learn more here. Picture credit to this site as well.)