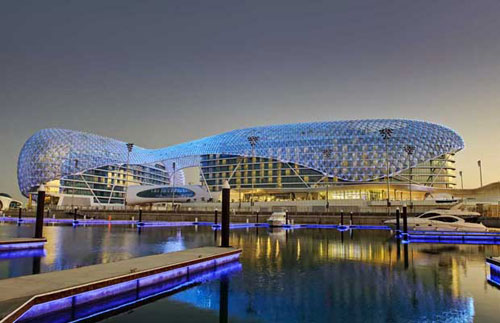 When we looked up the meaning of the word “Asymptote” we found the following meaning at the Merriam Webster Site: :
asymptote: a straight line associated with a curve such that as a point moves along an infinite branch of the curve the distance from the point to the line approaches zero and the slope of the curve at the point approaches the slope of the line
When we looked at the Yas Hotel, located in Abu Dhabi, and designed by an architecture firm in New York called Asymptote, it all made sense.
The rolling covering on the roofs looks like an infinite curve , like a wave in an ocean, or one of those sillyband rubber band bracelets everyone likes. It looks sci-fi building, and we wish we could visit the United Arab Emirates to go inside.
Of course the heat in the Middle East, makes the rolling roof covering great for protection against the sun’s heat. And the hotel is built over a Formula One race track! Yow, that is pretty neat – the infinite curves of the race track, of the roofs, of the rubberband, it all makes sense!
Images and more info can be found at the architecture firm website, Asymptote.