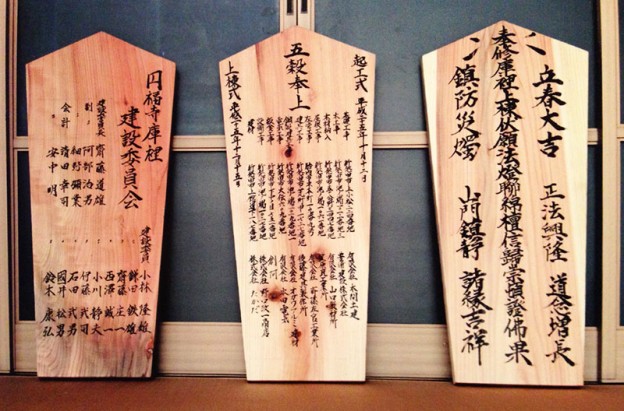 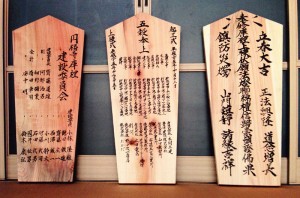 Our Japanese friend, Masako, sent us some great photos of a new buddhist temple under construction and she included this photo of wooden planks, inscribed with various Japanese characters. We wondered what these were and found out that they are called Munafuda. As the temple building is being constructed, these wooden pieces will be placed in the space between the roof and the ceiling and they will rest there as long as the building exists.

What is written?
Each piece of wood has a different inscription:
The one on the left has the names of all of the companies that participated in building the temple, like the electricians and plumbers. The one in the center has words of prayer for all of the members of the temple, including prayers to protect them from disasters, like earthquakes and fire. The one on the right has the names of the architect and the builder as well as the name of the head priest of the temple.
The cost of the entire temple building, the price of 60 kilograms of rice and the wages paid to the carpenter are also written on the boards.

In a way, this is the tangible, historical record of this building. At any time in the future, there is so much information that can be found by anyone who discovers the munafuda. By keeping the planks within the structure itself, they are a part of the living and breathing building, they will age as the building ages and exist as long as it does. 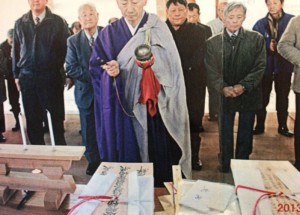 At the ceremony called Jyotoshiki, the priest prays in front of the munafuda. This is a prayer that acknowledges the completion of the framework of the building. Even ordinary homes have a Jyotoshiki ceremony, not just big temples.

Thank you to Masako for these photos and for the great explanations of these Japanese traditions.

Here is a link to some photos of someone painting munafuda. We like that word, do you?