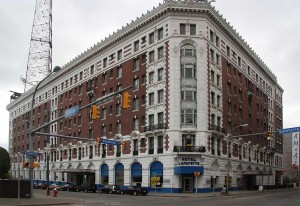 You probably have not heard of her – Louise Blanchard Bethune – was the first professional woman architect in the United States. Way back in 1881, Louise opened an architecture firm with her husband. She worked on many buildings – and not just small homes or interiors, but big industrial buildings and important structures like a big hotel, mostly in Buffalo New York, where she lived.
The Women in Architecture website at University of Illinois wrote that “In 1891, she refused to compete for the design of the Woman’s Building at the World’s Columbian Exposition in Chicago because of the different way in which male and female architects were treated. Male architects were paid $10,000 to design buildings for the fair, but women had to compete for the honor. The ones who won would receive only a $1,000 prize.”

Think about that now. Would it be possible for men and women to have different prize monies in a competition? Some things have changed a lot. Thank goodness.

It would have been fun to meet her and talk about what it was like to be a renegade female architect, back in the nineteenth century.