A long time ago, at Northwestern University, a library was built. It was named the Deering Library, and it was made of stone and wood and it had great details of animals and curlicues worked into the wood and stone alike.
Students would visit this library, entering through the massive wooden doorway and study for their classes, and sometimes they would talk and mingle with each other. It was a warm and wonderful place for many years. And then, 42 years ago, in 1970, a newer library was built. And the doors to Deering were forever closed.
Forever? NO!
Thankfully, the Deering Library doors were just reopened, restored and renovated by a team of architects from the firm, H.B.R.A. Architects, of Chicago. We spoke to a couple of the architects while they were examining the work that was done. 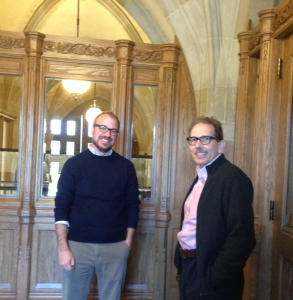 One of them was Bill Kinane (architect on the left), the other was Dennis Rupert (architect on the right). They told us that the designs on the new areas of the entry were based on all of the existing work, and it is virtually impossible to tell the difference between the old and the new sections. The current architects tried hard to make the work look as original as possible, to respect the work of the original architect, James Gamble Rogers.The architectural drawings are so intricate and beautiful. The craftsmanship of the carvings and carpentry is also amazing. 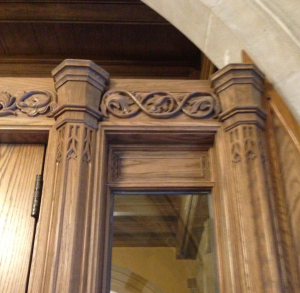 The two architects from H.B.R.A. both wore big eyeglasses. Do you think that those are necessary for any architect to see great details?

James Gamble Rogers was the original architect of the building, which opened in 1933. Find out more about him.

And discover more about H.B.R.A. here.

Watch a video about the reopening of the Deering Library doors at Northwestern University in Evanston, IL.