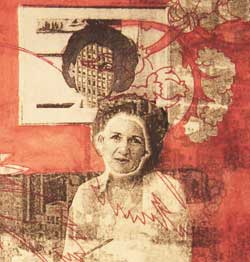 Sometimes we make up a word. Like “Kapow” when Batman hits the Riddler in the stomach, or “muckity muck” that material that we step into – you know – the “glooppy glop” that is at the edge of the curb after a sudden huge rainstorm.

Back in 1968, a very famous American architecture historian and architecture critic (yeah, there is a job doing that!) whose name is Ada Louise Huxtable wrote an article for the New York Times titled “Lessons in Urbicide” and it was about the demolition of older american buildings that were not considered valuable anymore to some people. Now the word URBICIDE is not a word that you will find in the dictionary. But we can all understand what she means when she uses it.

An herbicide is a chemical that kills or destroys plants – it is generally used on weeds so that they do not overtake the plants that we do want to grow. The problem with herbicides is that they often leave horrible chemicals on the good plants, plants that we eat and use, and that is not so good for us or for other animals – or the air or planet.

So if an herbicide is the killing off of plants, in the same way, URBICIDE is the killing off of buildings. And what a waste. There have been beautiful buildings in the past that people have torn down, in fact entire towns, without discrimination. This means, buildings have been taken down without careful thought and consideration about what they mean to a community, to the people who built them and live around them, to history and to the definition of what is American. Ada Louise Huxtable wrote a great article about it in 1968 for the New York Times and it is in one of her books with a funny title “Goodbye History, Hello Hamburger”. I hope I can meet her someday because I think she is so very right and so smart.

Another fine book with her writing is [amazon_link id=”0802717071″ target=”_blank” ]On Architecture: Collected Reflections on a Century of Change[/amazon_link].